Popular singer Adekunle Kosoko simply known as Adekunle Gold had a fallout with one of his fans named Olamide after getting the rare privilege of Adekunle following his Twitter account.

Trouble ensued after Olamide laid pointers to the fact that the singer following him on Twitter does not mean he can not argue with him.

Replying to the tweet, Adekunle gold said he has unfollowed him so that he can argue more now. Do you think the singer went too far? This is what Yoruba people call and we interpret: Have it, let me rest

See screenshot of their exchange below; 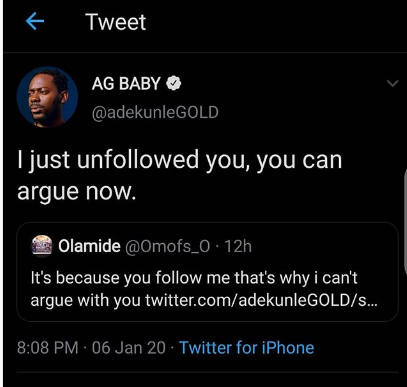